“For A Bigger Picture ”

Ling Yun is a freelance writer, scriptwriter, and animator. She used to be an editor of fashion magazine, author of experimental novels collection "Fugue of February". Currently she working and living in Shanghai.

Yang Fudong
Yang Fudong was born in Beijing in 1971, and now lives and works in Shanghai. He graduated from the Department of Oil Painting, China Academy of Art in Hangzhou. He is among the most successful and influential Chinese artists today. Yang has started to create video works since late 1990s. His works form a unique cultural visual interpretation through multiple cultural perspectives interlaced with experiences of space and time with photograph, painting, film and installation. They are all characterised by multi-perspectives, exploring the structures and forms of identities in myths, personal memories and life experiences. Each work could be considered as both a dramatic lived experience and a challenge.

"I love my motherland (wo ai wo de zhu guo)"is Multi -channel video made by Yang Fudong. In one of the short sequences comprising I Love My Motherland, a man performs a formless dance at an intersection. The picture is out of focus. Yang Fudong operates here, too, with the alienating possibilities of experi-mental ？lm, with short cuts and multiple exposures. 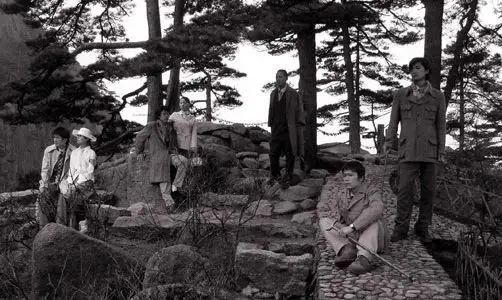 “Seven Intellectuals in Bamboo Forest “(2003-2007), have five series in total. Yang Fudong’s attempt to develop a grand worldview in the form of an epic tale of a group of individuals defying the times in which they live. The title is borrowed from a popular legend of seven intellectuals who sought refuge from the chaos of the Warring States Period in a bamboo forest, where they indulged in serious talk unsullied by worldly matters. It is used as a metaphor for the resistance of the young Chinese who feel unable to keep up with the pace of change in China and, as a result, experience a kind of identity crisis.

Artist Yang Fudong takes "Painterly Film" as the main form of expression, combines photography and video installation media to re-establish the narrative structure of viewing. He extracted characters and narratives in different historical backgrounds from ancient painting subjects, then reinterpreted the contemporary spirituality in classical works by means of re-creation with the performance characteristics of various media. With the commonality between individual cognitive traces and creation, he shows the subtle connection between "meaning" and "image" in painterly films.

In recent years, his works challenge the definition of video creation, the boundary of viewing, and the relationship between media and narrative. Taking the important category of Chinese aesthetic thought "Tacit" as the core, he deepened and recreated from the section of history and culture, so as to explore the essence of human spiritual life.

The APSMUSEUM Spring Exhibition "For A Bigger Picture" will display the collaboration of artists Ling Yun and Yang Fudong, please stay tuned.

For A Bigger Picture